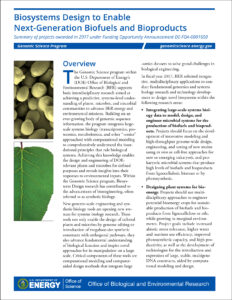 The Genomic Science program within the U.S. Department of Energy’s (DOE) Office of Biological and Environmental Research (BER) supports basic interdisciplinary research aimed at achieving a predictive, systems-level understanding of plants, microbes, and microbial communities to advance BER energy and environmental missions. Building on an evergrowing body of genomic sequence information, the program integrates largescale systems biology (transcriptomics, proteomics, metabolomics, and other “-omics” approaches) with computational modeling to comprehensively understand the foundational principles that rule biological systems. Achieving this knowledge enables the design and engineering of DOE-relevant plants and microbes for defined purposes and reveals insights into their responses to environmental inputs. Within the Genomic Science program, Biosystems Design research has contributed to the advancement of bioengineering, often referred to as synthetic biology.
New genome-scale engineering and synthetic biology tools are opening new avenues for systems biology research. These tools not only enable the  design of tailored plants and microbes by genome editing or introduction of megabase-size synthetic constructs with orthogonal pathways, they also advance fundamental understanding of biological function and inspire novel approaches for its manipulation on a large scale. Critical components of these tools are computational modeling and computer-aided design methods that integrate large -omics datasets to solve grand challenges in biological engineering.

Building on prior funding from BER for systems biology work on Rhodococcus opacus, this project will apply innovative combinations of -omics and mass spectrometry data analysis, flux analysis, and machine learning to develop improved genome-scale models that will guide multiplex genome engineering of R. opacus strains with branched-chain fatty acid esters (BCFAE) biosynthetic capacity and improved tolerance to lignin degradation products. The project will take advantage of this organism’s capability to use both polysaccharides and lignin as carbon sources as well as its natural tolerance to phenolic compounds such as those produced by lignin breakdown.

The strength of this project is that it will advance biological engineering to a new level of throughput and complexity. Guided by computer-aided design platforms, this research will develop new finely tuned microbial strains containing orthogonal regulatory networks. The redesigned strains will be tailored to grow on a variety of feedstocks, tolerate toxic metabolites and other stresses, and produce valuable molecules. Building on technologies and knowledge developed with prior DOE funding from the Biosystems Design program, the project will further develop the necessary technical and computational infrastructure to achieve its goals, initially working with Escherichia coli and Saccharomyces cerevisiae and later transferring the technologies to other non-model bacteria and yeast species.

This project will focus on Rhodosporidium toruloides and Issatchenkia orientalis, two industrial yeast species, to develop the tools needed to turn these organisms into model systems for biological design. R. toruloides will be engineered to produce fatty alcohols from lignocellulose-derived sugars, and the target products for I. orientalis will be organic acids such as muconic acid and methyl methacrylate. The project will leverage genome-scale engineering tools previously developed for Saccharomyces cerevisiae by the PI’s laboratory that apply CRISPR-Cas methods for multigene disruptions (homology integrated CRISPR-Cas or HI-CRISPR) and CRISPR-based gene activation, interference, and deletion (CRISPR-AID). A highly automated robotic pipeline already operational at the University of Illinois will be used for high-throughput genetic manipulation and engineering of the two yeast species.

This project will develop an integrated set of technologies for high-throughput metabolic pathway design and engineering of Clostridia, called the Clostridia Foundry for Biosystems Design (cBioFAB), to produce fuels and chemicals from lignocellulose-derived syngas. Using multi-omics, computational modeling, genome engineering, and cell-free and in vivo technologies, the Foundry will focus on the production of acetone, butanol, butanediol, and mono-ethylene glycol as proof of concept. The project will leverage DOE Joint Genome Institute (JGI) efforts to sequence the genomes of multiple Clostridium strains and use a computer-aided design tool called Biochemical Network Integrated Computational Explorer (BNICE) developed by team members to identify relevant metabolic genes and pathways that will be subsequently tested in cell-free systems. New CRISPR-based genome-editing techniques will be developed for Clostridium, and metabolic ensemble modeling will be used to predict in vivo pathway performance from cell-free assays.

The model system on which this project will focus is the oleaginous green alga Chromochloris zofingiensis because it is fast-growing, can be cultured at high densities, and accumulates triacylglcyerols (TAG) at the highest levels observed among microalgae. C. zofingiensis metabolic regulation is unique because in the presence of glucose, photosynthesis is switched off by degrading the thylakoid membranes and photosynthetic machinery, while lipid production is substantially increased; the process is reversed when the glucose supply is exhausted. The project will leverage a high-quality genome assembly of the C. zofingiensis genome recently generated by the research team and will enhance it with multi-omics and physiological analyses to build a model to guide metabolic engineering of this alga for the production of biofuel precursors.

To identify the plant genes involved in the development of symbiotic nodules containing nitrogen-fixing microbes  (diazotrophs), this project will analyze the evolution of those symbioses. Prior studies by members of the research team showed that microbe-mediated nitrogen fixation was originated and lost multiple times during the evolution of the nodulating plant clade. Therefore, investigators intend to identify the genetic machinery used by nodulating plants and introduce it into non-nodulating bioenergy crops such as poplar, thereby reducing this crop’s need of nitrogen fertilization. To achieve this ambitious goal, the team will conduct extensive phylogenetic analysis of over 20,000 species using available genomic sequence data as well as samples from multiple plant species, including preserved museum specimens from around the world. Selected engineered poplar lines will be tested for their ability to establish symbiotic  relationships with diazotrophs, as well as for their biomass productivity and composition.

To engineer bioenergy crops that can grow in dry, marginal lands, this project will introduce into poplar trees tolerance to different environmental stresses such as water deficit, high soil salinity, and heat. As plants are often exposed to combinations of these different types of abiotic stress, poplar lines will be engineered to express multiple stress-related genes, each one controlled by a synthetic promoter that is only induced under specific stress conditions and within the tissues where its function is needed, improving biomass production under unfavorable conditions while avoiding negative effects of unwanted transgene expression. The project will focus on a poplar hybrid clone for which a genome sequence is available and will design tissue- and stress-specific synthetic promoters using plant promoter databases and computational tools to identify cis-regulatory elements.

Building on prior work on the model grass Setaria, funded by DOE as part of the Biosystems Design program, this project aims at increasing water use and photosynthetic efficiencies in the bioenergy crop sorghum. Leveraging the resources previously developed by the research team for Setaria, investigators will accelerate the generation of engineered high-biomass sorghum lines that grow in marginal lands using innovative genome-editing tools, genome-scale modeling, -omics approaches, genome-wide association studies, and high-throughput phenotyping in both laboratory and field settings. The work will exploit the efficient transformation and screening pipelines available for Setaria to facilitate gene discovery and pathway design that can be transferred to sorghum. Because biomass productivity strongly depends on photosynthesis and water availability, the engineering work will focus on three main topics: enhanced carbon assimilation, increased root water uptake, and reduced water loss through stomata.

This project will pursue an innovative approach to engineer oil accumulation in vegetative tissues of bioenergy crops. Leveraging previous efforts toward producing oil in sugar cane leaf tissue, the researchers will attempt to redirect and increase TAG accumulation in the stems of energy cane and Miscanthus. As these species are close relatives of sugar cane, CRISPR/Cas9-based genome-editing technologies previously developed in sugar cane will likely be transferable to these new plant systems along with novel genome-engineering methods. The ultimate goal of the project is to reach a TAG accumulation of up to 20% of dry stem weight, which represents a productivity increase of more than one order of magnitude relative to oilseed crops. Computational modeling will be used to design improved photosynthetic capacity that they expect to reach 50%, along with increased nitrogen and water use efficiency, to account for the required redirection of carbon flow from lignocellulosic biomass to oil in the redesigned plant lines.

The goal of this project is to divert carbon flow from starch accumulation to oil production in resting fronds of Lemnaceae (duckweed) species, thereby redesigning existing commercial strains towards biofuel production. Lemnaceae’s rapid growth, high proportion of photosynthetic tissue due to its lack of lignified supportive tissue, and its ability to grow in marginal wastewater environments are among the advantages of these small aquatic plants. An available genome sequence and other -omics resources will be leveraged, along with other products from prior DOE funding (ARPA‐E) to significantly increase oil content in Lemnaceae. Metabolic pathways will be re‐engineered to maximize TAG yields while preserving rapid biomass accumulation, and tools for genetic manipulation, metabolic flux models, and a catalog of key transcription factors and promoters will be developed to elevate this emerging plant model system to a potential bioenergy crop.

This project will establish Camelina sativa as a commercially viable, dedicated biofuel and bioproduct feedstock. Its low agronomic input requirements, natural tolerance to different stresses, available molecular and genomics tools and resources, and suitability of its oil for transportation as liquid fuel blends are some of Camelina’s advantages over other oilseed crops. However, oil yield from Camelina seeds is relatively low. To improve oil production, an integrative approach including metabolic flux modeling, proteomics, regulatory network analysis, and multi‐gene stacking and genome-editing techniques will be employed to optimize photosynthetic carbon fixation in leaves, its transport to seeds, and the allocation of fixed carbon to TAG. With this approach, the team aims at increasing oil production to 300% per hectare, thus greatly enhancing the feasibility of developing Camelina as a cost‐competitive bioenergy crop.