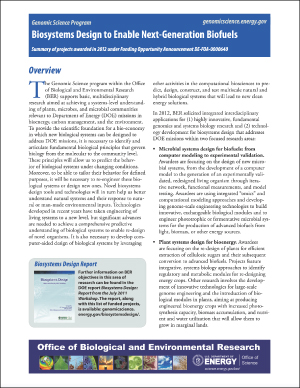 The Genomic Science program within the Office of Biological and Environmental Research (BER) supports basic, multidisciplinary research aimed at achieving a systems-level understanding of plants, microbes, and microbial communities relevant to Department of Energy (DOE) missions in bioenergy, carbon management, and the environment. To provide the scientific foundation for a bio-economy in which new biological systems can be designed to address DOE missions, it is necessary to identify and articulate fundamental biological principles that govern biology from the molecular to the community level. These principles will allow us to predict the behavior of biological systems under changing conditions.

Moreover, to be able to tailor their behavior for defined purposes, it will be necessary to re-engineer these biological systems or design new ones. Novel biosystems design tools and technologies will in turn help us better understand natural systems and their response to natural or man-made environmental inputs. Technologies developed in recent years have taken engineering of living systems to a new level, but significant advances are needed to achieve a comprehensive predictive understanding of biological systems to enable re-design of novel organisms. It is also necessary to develop computer-aided design of biological systems by leveraging other activities in the computational biosciences to predict, design, construct, and test multiscale natural and hybrid biological systems that will lead to new clean energy solutions.

This project will take advantage of an engineered strain of the oleaginous yeast Yarrowia lipolytica that can produce high yields of lipids from carbohydrates and organic acids. A genome-scale dynamic metabolic modeling approach called Ensemble Modeling, aided by transcriptomics and metabolomics analysis of lipid content, will be conducted to guide further re-design and engineering of Y. lipolytica strains for increased lipid production. Newly optimized yeast strains showing high oil yields from sugars abundant in biomass as well as from acetate, which can be the product of inexpensive anaerobic cellulose degradation, will potentially lead to new and efficient ways for biodiesel production.

A platform for genome-scale design, redesign, and optimization of bacterial systems

Building upon genome engineering technologies developed by the applicants’ laboratories as well as others, the researchers will engineer Escherichia coli strains with enhanced recombineering capabilities, optimized for the production of ethylene and isobutanol that can be directly converted into biofuels. These strains will be used for the development of a next-generation high-throughput synthetic biology and genomic engineering technology platform for predictive design of DOE-relevant bacterial systems for biofuel production. Multiplexed mutational strategies will be developed to induce genome-wide changes not only in individual promoters but also in other regulatory features and open reading frames. Iterative cycles of metabolic modeling and high-throughput screening will allow the optimization of re-designed biofuel-producing strains.

This project will generate genome-scale metabolic models of the diatom Phaeodactylum tricornutum informed by multiple “omics” techniques, metabolic flux, protein localization, and protein interaction data. Comparative modeling analysis of diatoms and other photosynthetic organisms will be used to identify key regulatory elements that will be targeted for reprogramming gene and metabolic networks to enhance carbon and energy flux toward the production of lipid-based biofuels. Genomic engineering technologies to introduce large extrachromosomal DNA segments into diatoms will be developed using yeast and E. coli intermediates to obtain new diatom strains with high oil content.

In order to take advantage of the lack of lignin and crystalline cellulose in the cell wall of brown macroalgae, this project will investigate algae-associated microbes to identify new metabolic modules capable of degrading the brown algae carbohydrates such as alginate, laminarin, and fucoidan, thus circumventing the recalcitrance problem of land plants whose lignocellulosic cell walls are very difficult to degrade. In addition to known algae-associated candidate microbes, uncultured microorganisms will be analyzed by fluorescence-based screening and single-cell genomics methods to identify new metabolic capabilities. Genetic modules comprising selected metabolic pathways will be engineered in yeast and E. coli using a one-step method for the design and construction of biosynthetic pathways that can be tuned with a combinatorial transcriptional engineering approach for heterologous gene expression.

This project will develop advanced kinetic models for the plant shikimate and phenylpropanoid/phenylalanine pathways using Arabidopsis as a model system to allow predictive design of experiments to modulate fluxes toward desired products. The investigators will carry out flux measurements in plants with altered lignin and phenylalanine pathways, including plants expressing a novel hydroxylase that reroutes lignin synthesis, uncoupling it from the shikimate pool levels. As a proof of concept, they will engineer plants for the production of 2-phenylethanol, which is a promising biofuel candidate due to its high energy density, low hygroscopicity, and low volatility.

This multidisciplinary research team will address two important challenges to developing high-yield bioenergy crops that can grow in arid, marginal lands to avoid land competition with food crops. The project will start by conducting an extensive quantitative trait loci (QTL) study of drought tolerance and planting density in the model C4 grass Setaria viridis, which is a close relative of biomass crops such as switchgrass, sugarcane, sorghum, and Miscanthus. Extensive molecular and physiological studies will be carried out in selected lines to build integrated metabolic and genetic networks; candidate genes will then be analyzed in the context of those network models. New transformation technologies will be tailored for Setaria biodesign, and methods for monitoring flow of transgenes will be developed as part of this project.

Crassulacean Acid Metabolism (CAM) is a photosynthetic CO2 fixation mechanism common in plants that grow in hot and arid environments to maximize water use efficiency. This project will attempt to engineer a functional CAM pathway in poplar and Arabidopsis. The introduction of this metabolic machinery into a bioenergy crop such as poplar will increase its water use efficiency allowing cultivation in marginal lands for biofuel production. Genomics and systems biology analyses of monocotyledonous and dicotyledonous CAM species will identify the necessary carbon assimilation and stomatal control modules for engineering C3 plants such as poplar, as well as the model plant Arabidopsis, to acquire CAM metabolism.

The goal of this project is to engineer the bioenergy crop switchgrass to facilitate molecular breeding approaches for genetic improvement, overcoming major problems posed by its tetraploid nature and the lack of inbred lines. Investigators will engineer new tools to dramatically advance breeding in switchgrass by developing homozygous plants through the generation of double haploids. To do this, the researchers will create a mutant in a centromere-specific histone that produces haploid plants, which can be diploidized upon crossing to wild type individuals. This project will also use a perennial Brachypodium sylvaticum model system to understand and improve drought tolerance and nutrient use efficiency and to develop new tools for further genomic engineering of perennial grasses. Translation of these technologies to switchgrass will include the development of transgenic systems to minimize gene flow.