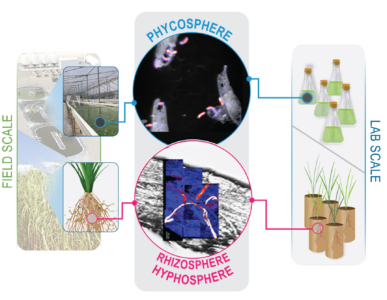 This Science Focus Area (SFA) examines the community systems biology of microbial consortia closely associated with bioenergy-relevant plants and algae, with the ultimate goal of developing predictive models to understand how these systems will respond to external stimuli. Photosynthetic algal and plant systems are unrivaled in their ability to convert solar energy and carbon dioxide (CO2) into useful organic molecules. The growth and photosynthetic efficiency of plants and algae are largely shaped and assisted by the microbial communities (heterotrophic symbionts) that dwell in and around them and are sustained by their primary productivity. SFA research aims to understand phototroph-symbiont interactions that shape biomass productivity, crop robustness, the balance of resource fluxes (carbon, nutrients, water), and the functionality of the surrounding microbiome. The project’s overarching hypothesis is that different heterotrophic symbionts not only have differential effects on host productivity but can also change the entire system’s resource economy—a critical metric for sustainable bioenergy cultivation. Research focuses on interactions in two model systems: (1) bacteria and algae in the phycosphere (the surface of algal cells) and (2) soil bacteria, fungi, and plant roots in the rhizosphere (the soil surrounding plant roots) and endosphere (all of a plant’s endophytes). Of particular interest is understanding how microscale interactions affect larger-scale parameters such as plant robustness and sustainability. Consequently, the SFA’s approach encompasses single-cell measurements using, for example, quantitative isotope tracing of elemental exchanges between members of the model systems, as well as system-scale omics measurements. The focus is on two research areas: advanced computational modeling to integrate results and develop refined hypotheses, and new methods development to push the envelope of what can be measured and modeled at the single-cell level and how those results can be scaled.