A step toward establishing targets for a cost-competitive bioeconomy 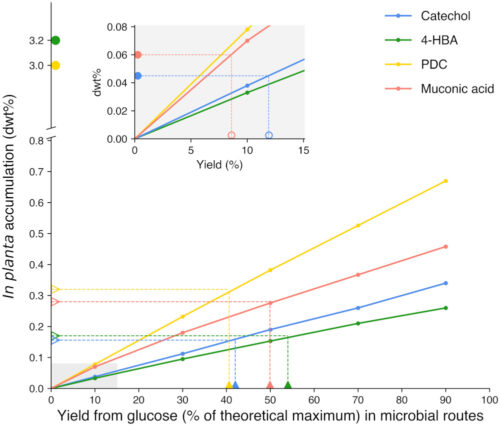 Bioenergy crops can be engineered to accumulate a range of high-value bioproducts in planta that can be fractionated and recovered for sale from biorefineries, thereby improving the cost-competitiveness of biofuels. But the economics of this approach have not previously been compared with microbial production routes. DOE Joint BioEnergy Institute (JBEI) research showed that accumulating bioproducts in bioenergy crops at levels as low as less than 1% can improve biorefinery economics across a wide range of commodity prices. In addition, cost-comparisons between plant and microbial systems demonstrate that in planta accumulation can be competitive with microbial production routes.

This work was part of the DOE Joint BioEnergy Institute, supported by the DOE Office of Science, Biological and Environmental Research program, through contract DE-AC02-05CH11231 between Lawrence Berkeley National Laboratory and DOE. This study was also supported by the DOE Office of Energy Efficiency and Renewable Energy, Bioenergy Technologies Office.