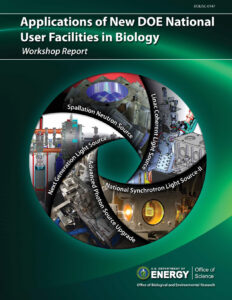 This report represents the discussions and findings of a workshop held in May 2011 to consider the significance for biological science of five major Department of Energy (DOE) national user facilities that either have recently begun full operations (Linac Coherent Light Source and Spallation Neutron Source), are under construction (National Synchrotron Light Source-II), or are being designed (Advanced Photon Source Upgrade and Next Generation Light Source).

The Office of Biological and Environmental Research (BER), a program office in DOE’s Office of Science, initiated support for researcher access to major user facilities for structural biology in 1990, when DOE was engaged in a similar program for constructing and upgrading these facilities. That initiative was focused on DOE synchrotron light sources and neutron beam facilities.

The workshop took place May 9-11 in Rockville, Maryland. Two months before the meeting, leaders from each of the five facilities submitted papers describing the facilities and potential applications in biology (these papers are included in Appendices A-E of this report). A panel of experts in the design, operation, and management of these facilities, as well as in major areas of biology supported by BER read these reports prior to the meeting (see Appendix F for participants list). At the meeting, the entire panel separately heard presentations from and engaged in discussions with representatives of each facility and then developed outlines for the chapters of this report.

The Executive Summary and the five chapters were prepared after the meeting by panel members and circulated to the entire panel for comments and editing prior to completion of the report. BER appreciates the involvement of all panel members, especially the co-chairs, Dagmar Ringe of Brandeis University and David Eisenberg of the University of California-Los Angeles.

All of the written materials in this report were edited and prepared for publication by members of the Biological and Environmental Research Information System group at Oak Ridge National Laboratory. BER is indebted to the members of this group who devoted extensive time and much thought to preparation of all report components for publication. Comments on this report will be welcomed by Roland Hirsch and Susan Gregurick, the BER program managers involved in the workshop.