Molecular Connections from Plants to Fungi to Ants 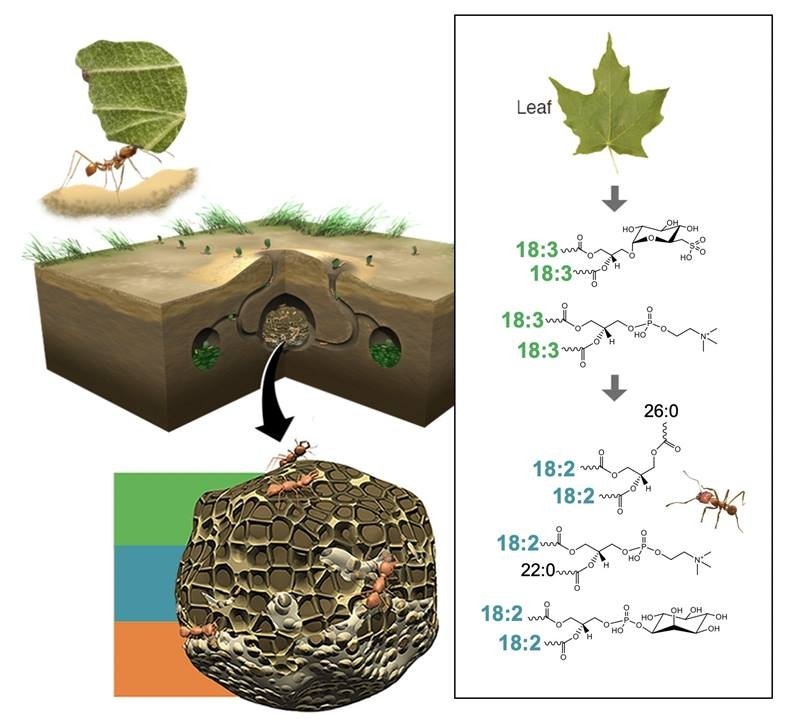 Leaf-cutter ants tend gardens of fungi that efficiently deconstruct plant biomass. This process converts lipids in the leaves into lipids the ants can use. Lipids in these gardens are an energy source, a component of cells, and a chemical for communication between organisms. A multi-institutional team studied the variation in lipid content at the top, middle, and bottom regions of these fungal gardens. The three regions correspond to different stages of leaf degradation. The team also analyzed the lipids in the leaves that ants feed to the gardens and in nutrient-rich swellings called gongylidia that the fungi produce, and the ants eat. Using advanced chromatography and mass spectrometry techniques, the team found that the leaves and fungal garden components were enriched with different lipids.

This study examines the role of lipids in the relationship between leaf-cutter ants and the fungi they cultivate. Both the ants and the fungi benefit, and the organisms co-evolved to create this symbiotic relationship. This study is the first global analysis of lipids in a symbiotic system. Understanding the lipid composition of ants’ fungal gardens provides new knowledge on communications between organisms in different kingdoms of life. It also advances the development of microbial systems that can produce useful compounds from plant biomass.

A team of scientists examined spatiotemporal changes in lipid content across six Atta leaf-cutter ants’ fungal gardens using advanced mass spectrometry technologies at the Environmental Molecular Sciences Laboratory, a Department of Energy (DOE) Office of Science user facility at Pacific Northwest National Laboratory. To understand which lipids existed initially, the scientists evaluated the lipid content of leaves that the ants feed to their fungal gardens. Then, they assessed the fungal gongylidia, as well as the top, middle, and bottom regions of the gardens at initial, intermediate, and advanced stages of leaf degradation, respectively. They compared the lipid content of the leaf material to the different regions of the fungal garden to track how the fungal cultivar consumed leaf lipids and synthesized its own lipids through the various regions. Leaf material at the top region of fungal gardens was enriched in alpha-linolenic acid (18:3). The team also compared the lipid content of the gongylidia to the middle region of the fungal garden to evaluate the hyphal swelling’s specific properties versus the area where the ants harvest it. Gongylidia was enriched in linoleic acid (18:2), which attracted the ants in a behavioral experiment. By restricting the enrichment of 18:2 lipids to the gongylidia, the fungus can focus the ants’ consumption to these specialized structures, thereby preventing damage to its growing filaments. This type of fungal metabolic regulation could be harnessed to develop microbial systems for sustainable bioproduct production.