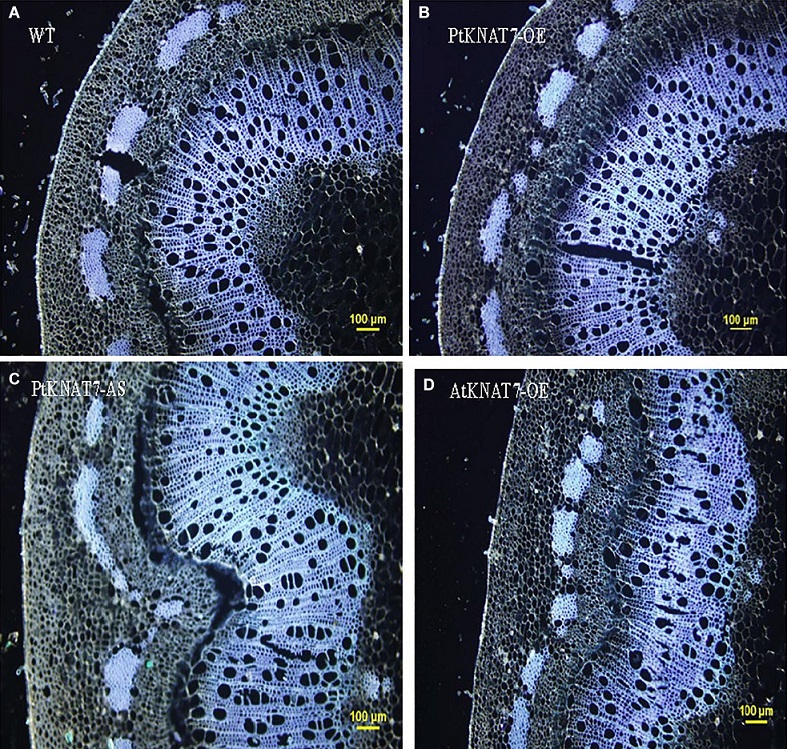 Autofluorescence of lignin in the stems of poplar plants, a potential biofuel crop, shows differences in xylem area and improved sugar release in transgenic poplar compared to wildtype (WT).
[Reprinted from Ahlawat et al. 2021 under a Creative Commons Attribution 4.0 International license (CC BY 4.0).]

Scientists collaborating through the Center for Bioenergy Innovation (CBI) have found that small modifications to a single plant gene can improve ethanol production from poplar trees. Poplar is a promising feedstock because it grows quickly and exhibits a large amount of genetic variation, with an available database describing 28 million genetic variations across the genome. The gene, KNAT7, is a transcription factor that regulates the biosynthesis of secondary cell walls in plant tissues which provide strength and stability to the plant. The precise role of KNAT7 in regulating secondary cell wall biosynthesis is largely unknown, but the CBI team theorized that genetically modifying KNAT7 might reduce the recalcitrance of plant cell walls to saccharification and fermentation during the production of ethanol and other bioproducts.

Surprisingly, both increased and decreased KNAT7 expression resulted in good sugar release without harming plant growth or yield, thereby facilitating sugar extraction for fermentation into ethanol. The team observed that KNAT7 modifications affected the composition of the lignin present in the secondary cell walls without necessarily reducing the amount of lignin produced during growth. The transgenic poplar lines had higher ratios of sinapyl alcohol to coniferyl alcohol in the lignin (i.e., S/G ratio) than wildtype poplar, an indicator that the lignin is more easily broken down into monomers for fermentation. Modification of KNAT7 expression in poplar therefore represents a strategy to improve ethanol production by designing an optimized feedstock that displays altered lignification and improved saccharification efficiency without sacrificing biomass growth and yield potential.

The CBI team studied the impact of slight genetic modifications to the KNAT7 gene in transgenic poplars. This contrasts with conventional approaches which typically turn a gene on or off completely. The all-or-nothing approach has a greater tendency to create undesirable side effects, such as stunted growth and greater susceptibility to disease. The changes made to KNAT7 were more subtle, targeting select functions and only during certain growth stages. The team generated overexpression transgenic lines using Agrobacterium in Populus tremula x P. alba 717-1 B4 to investigate the role of PtKNAT7 genes in secondary cell wall biosynthesis. They also studied heterologous overexpression of AtKNAT7 in transgenic poplar. The expression of KNAT7 transgenes was driven by developing a xylem-specific promoter, DX15, which caused many downstream secondary cell wall biosynthesis genes to be highly expressed. Gene expression, microscopy, growth measurements, lignin analysis, and saccharification studies were used to monitor the effects of increased and decreased KNAT7 expression.

Funding from the National Science Foundation to the “Sustainable Forest-Based Biofuel Pathways to Hydrocarbon Transportation Fuels” project at Michigan Technological University (Grant number #1230803). The work was also partially supported by the World Class University project of the Ministry of Science and Technology of South Korea (R31-2009-000-20025-0). This work was authored in part by Alliance for Sustainable Energy, LLC, the manager and operator of the National Renewable Energy Laboratory for the United States DOE under Contract No. DE-AC36-08GO28308. Support was provided by the Center for Bioenergy Innovation (Oak Ridge National Laboratory), a U.S. Department of Energy (DOE) Bioenergy Research Center supported by the Biological and Environmental Research Program in the DOE Office of Science.