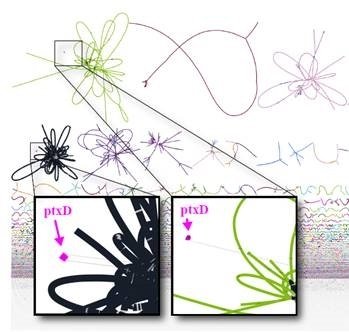 The metagenome of a DPO enrichment. Lines are clustered and connected based on their DNA sequence and indicate the separation of one organism's genome from another. The insets are two genome clusters that contain the marker gene (ptxD) for DPO.
[Image courtesy Sophia D. Ewens, Department of Plant and Microbial Biology, University of California, Berkeley ]

Phosphorus is a building block of all living cells. It is part of the structure of DNA. Cells use it to make membranes and many other molecules used in metabolism. In the earth’s current environment, most phosphorus occurs in the form of phosphate. In ancient oceans and soils, however, another form—phosphite—was also abundant. Microbes can gain energy by converting phosphite to phosphate. Scientists call this phosphorus reduction-oxidation (redox) cycling. Redox involves the movement of electrons from one chemical to another. Most textbooks and models of the environment ignore phosphorus redox cycling. This study suggests instead that the ability to use phosphite in energy metabolism is surprisingly widespread in nature.

Current models of the phosphorus cycle ignore the possibility that biological activity may cycle phosphorus among different redox states. These states involve the degree to which elements gain or lose electrons as part of chemical reactions. In many environments without oxygen, much of the available phosphorus is in the form of phosphite. Microbes convert this phosphite to phosphate. This study suggests that microbes capable of this activity are both ancient and widespread in nature. This metabolism also provides energy for carbon fixation. These findings expand scientists’ understanding of the biological cycling of chemical elements in nature.

Microbes are capable of oxidizing phosphite to phosphate to produce energy via a process called dissimilatory phosphite oxidation (DPO). While scientists have demonstrated this activity in the lab, its relevance in the environment has remained a mystery. During the early stages of Earth’s history, as much as half of the phosphorus in the ocean was likely present as phosphite. The emergence of oxygen in Earth’s atmosphere is thought to have converted most of this phosphite to phosphate, rendering the importance of DPO negligible. To the contrary, recent studies have demonstrated that phosphite can account for over 30% of phosphorus in diverse (mostly oxygen-free) environments. This raises the possibility that DPO is more widespread than previously assumed. Researchers used a combination of cultivation techniques and DNA-based studies to investigate the prevalence of DPO. They established enrichment cultures from environments that contained measurable amounts of phosphite and monitored them after adding several alternative terminal electron acceptors (carbon dioxide, nitrate, and sulfate). Culture data suggested that DPO was most likely coupled to the reduction of carbon dioxide rather than nitrate or sulfate. The researchers extracted DNA from enrichments and sequenced it to reconstruct the genomes of microorganisms with the potential to perform DPO. Metagenome assembled genomes with DPO relevant genes belong to several narrow but distantly related lineages. This indicates an ancient evolutionary origin of this metabolism. Metabolic reconstruction further confirmed that carbon dioxide served as the most likely terminal electron acceptor via the reductive glycine pathway. In addition to enrichments, the researchers analyzed more than 17,000 publicly available metagenomes for the presence of peptide signatures related to DPO activity. They observed matches in several metagenomes from diverse, but exclusively anoxic environments. These data suggest that phosphorus cycling is still an important process in the environment and should be considered in biogeochemical models of the global cycles of nutrients as well as carbon.