Microbes Offer a Glimpse into the Future of Climate Change 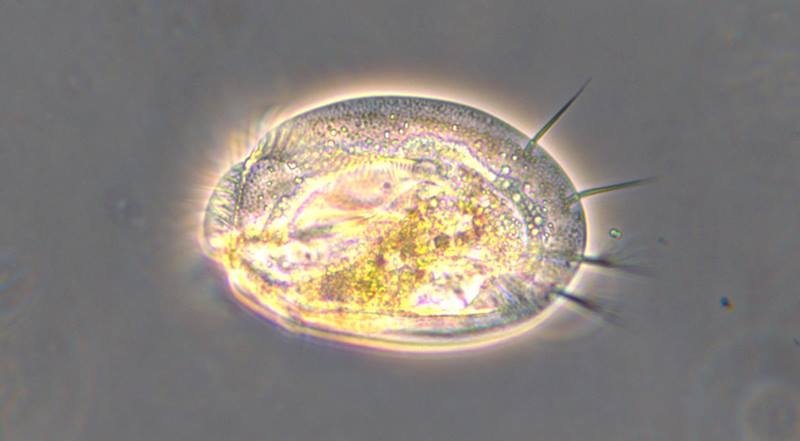 Single-celled protists like this Euplotes sp. are found in freshwater habitats worldwide and contribute to climate change by releasing carbon dioxide through respiration, a process that is changing with a warming climate.
[Image courtesy Daniel J. Wieczynski]

Microbes play an important role in climate because they release carbon dioxide (CO2) into the atmosphere when they eat. Bacteria and their main predators, protists, account for more than 40 times the biomass of all animals on Earth. As a result, they have a huge effect on CO2 emissions. However, predicting the size of that effect and how global warming will affect microbial CO2 emissions is challenging. Researchers showed that measuring certain features of microbes—like size and shape—allows them to reliably predict how respiration in those microbes will change as temperatures rise. The findings create a new source of information on the pace of climate change.

Understanding how warming will affect microbial respiration is difficult because microbial communities are incredibly diverse and complex. This study shows that the complexities of how microbes respond to warming can be disentangled by studying the microbes’ traits. These findings suggest that scientists can make reliable, general predictions about this important component of the global carbon cycle and its effects on climate. In addition, the findings may be useful for making predictions about other systems that also shape the Earth’s climate.

Predicting how ecosystems will respond to climate change is one of the most pressing issues in ecology. Researchers have argued that understanding complex ecosystem responses requires a framework that mechanistically links organisms to their environment, then scales these interactions up to the population, community, and ecosystem levels. Functional traits are measurable characteristics of organisms that make this linkage possible by controlling variation in individual growth, survival, and reproduction across environments. This study measured key traits in protists—cell size, shape, and contents—and found that species with different trait values respond differently to changes in temperature, in terms of population growth rate. The scientists also found that these trait-based differences in population growth create differences in competitive ability, controlling protist community structure and ecosystem-level features like biodiversity and total respiration rate across temperatures in predictable ways. Understanding complex ecosystem responses to global climate change is especially difficult because ecosystems involve myriad interactions across levels of organization and a diversity of species, each with unique environmental responses. In this study, traits provide a way to reduce this complexity by exposing systematic variation in environmental responses across species and levels of organization. Protists and their bacterial prey play a major role in carbon flux by breaking down organically stored carbon and releasing it into the atmosphere through respiration. These findings are thus crucial for understanding how climate change will alter this essential microbial component of the global carbon cycle. But these results also imply that such a trait-based approach may extend to other systems and could be incorporated into earth system models, informing ecosystem responses to climate change in general. Overall, this provides a glimmer of hope for disentangling the complexity of ecosystems and predicting the causes and consequences of future climate change.

This work was supported by the Biological and Environmental Research Program within the U.S. Department of Energy Office of Science.