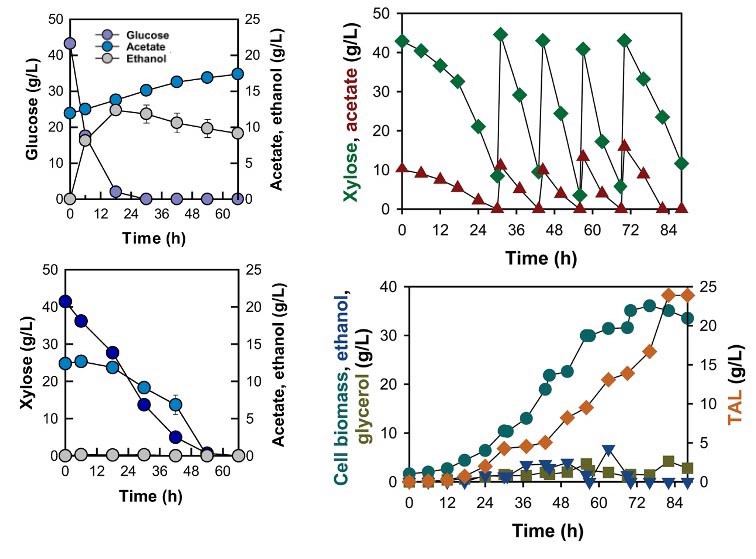 Co-utilization of xylose and acetate by the xylose-fermenting yeast (left). Fed-batch culture with xylose and acetate co-feeding for the production of TAL (right).
[Reprinted from Sun, L. et al. 2021 under a Creative Commons license 4.0 International (CC BY 4.0).]

Increasing demand for natural resources, growing concerns about climate impacts, and the desire to ensure future U.S. energy security have sparked wide interest in using microbial fermentation to develop biofuels and chemicals from renewable plant materials. To this end, considerable efforts in microbial engineering have sought to increase bioconversion of lignocellulose into target bioproducts. However, due to the acetylation of hemicellulose and lignin in the plant cell wall, cellulosic hydrolysates contain not only sugars, but also substantial amounts of acetate, an inhibitor toxic to fermenting microorganisms. This toxicity is a major challenge in successful commercialization of lignocellulosic-based biorefineries. Detoxifying acetate by exploiting its consumption to enhance acetyl-CoA supply in yeast could produce value-added products.

Researchers from the Center for Advanced Bioenergy and Bioproducts Innovation (CABBI) demonstrated that an engineered yeast, Saccharomyces cerevisiae, can rapidly co-consume acetate and xylose. The co-consumption leads to a metabolic re-configuration in engineered strains that boosts the synthesis of bioproducts derived from acetyl-CoA, including triacetic acid lactone (TAL) and vitamin A. The team’s findings establish a versatile strategy that not only transforms an inhibitor into a valuable substrate, but also expands the capacity of acetyl-CoA supply in S. cerevisiae for efficient bioconversion of cellulosic biomass.

RNA sequencing analysis by the CABBI team revealed the underlying mechanisms of acetate detoxification and co-consumption with xylose in yeast. The team further engineered a xylose-fermenting yeast to produce TAL and other bioproducts derived from acetyl-CoA. In contrast to the hampered acetate consumption by glucose, the engineered yeast rapidly assimilated up to 12 g/L of acetate in the xylose cultures. By co-consuming acetate and xylose, the engineered strain produced 23.91 g/L TAL with a productivity of 0.29 g/L/h in a bioreactor fermentation. The strain also completely converted a hemicellulose hydrolysate of switchgrass into 3.55 g/L TAL. Overall, these results show that engineered S.  cerevisiae can rapidly co-consume acetate and xylose, which detoxifies acetate into a valuable substrate, expands the capacity of acetyl-CoA supply in S. cerevisiae, and enables conversion of plant cell wall hydrolysates into acetyl-CoA–derived bioproducts.

This CABBI research was supported by the Office of Biological and Environmental Research, within the U.S. Department of Energy (DOE) Office of Science, under Award Number DE-SC0018420.