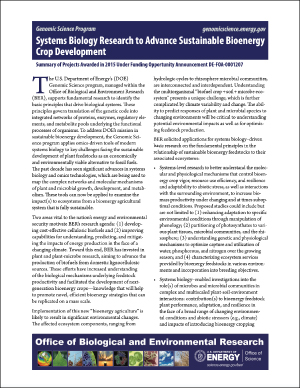 The U.S. Department of Energy’s (DOE) Genomic Science program, managed within the Office of Biological and Environment Research (BER), supports fundamental research to identify the basic principles that drive biological systems. These principles govern translation of the genetic code into integrated networks of proteins, enzymes, regulatory elements, and metabolite pools underlying the functional processes of organisms. To address DOE’s mission in sustainable bioenergy development, the Genomic Science program applies omics-driven tools of modern systems biology to key challenges facing the sustainable development of plant feedstocks as an economically and environmentally viable alternative to fossil fuels. The past decade has seen significant advances in systems biology and omics technologies, which are being used to map the complex networks and molecular mechanisms of plant and microbial growth, development, and metabolism. These tools can now be applied to examine the impact(s) to ecosystems from a bioenergy agricultural system that is fully sustainable.

Two areas vital to the nation’s energy and environmental security motivate BER’s research agenda: (1) developing cost-effective cellulosic biofuels and (2) improving capabilities for understanding, predicting, and mitigating the impacts of energy production in the face of a changing climate. Toward this end, BER has invested in plant and plant-microbe research, aiming to advance the production of biofuels from domestic lignocellulosic sources. These efforts have increased understanding of the biological mechanisms underlying feedstock productivity and facilitated the development of next-generation bioenergy crops—knowledge that will help to promote novel, efficient bioenergy strategies that can be replicated on a mass scale.

Implementation of this new “bioenergy agriculture” is likely to result in significant environmental changes. The affected ecosystem components, ranging from hydrologic cycles to rhizosphere microbial communities, are interconnected and interdependent. Understanding the multiorganismal “biofuel crop + soil + microbe ecosystem” presents a unique challenge, which is further complicated by climate variability and change. The ability to predict responses of plant and microbial species to changing environments will be critical to understanding potential environmental impacts as well as for optimizing feedstock production.

BER solicited applications for systems biology–driven basic research on the fundamental principles in the relationship of sustainable bioenergy feedstocks to their associated ecosystems:

This Funding Opportunity Announcement focuses on omics-driven basic research aimed at enabling the integrated development of sustainable bioenergy feedstock systems in terrestrial environments within the ecosystem context. The development of integrative, physiologybased models to attain a systems-level understanding of the plant-soil-microbiome ecosystem and identify key parameters of bioenergy plant sustainability is encouraged. The emphasis is on key variables such as genomic properties of biofuel crops and relevant biological processes (e.g., rhizosphere community functions, soil carbon stabilization, nutrient cycling, and greenhouse gas production) that enable quantitative, accurate prediction of plant performance and ecosystem processes under changing environments.

Project Goal and Summary: Identify the key molecular players in the development of low-nitrogen tolerance within a water-poor environment by exploiting the genomes of “extreme survivor” plants adapted to marginal, extremely nitrogen-poor soils in the arid Chilean Andes. These extreme survivor species cover the main branches in flowering plants and include 7 grass species of particular interest for biofuels, focusing on 24 Chilean species that are relevant to biofuels and their 24 Californian sister species. This project uses a phylogenomic approach and a “paired species” sampling strategy to identify the genes responsible for the divergence of the extreme survivors from their most closely related species growing on arid but nitrogen-replete soils in California. Comparative studies will help to identify the mechanisms underlying physiological and developmental processes that allow efficient capture, assimilation, and remobilization of nitrogen in nitrogen-poor soils. The genes and network modules so uncovered can potentially be translated to biofuel crops to greatly increase biomass and nitrogen use efficiency in marginal, low-fertility soils.

Project Goal and Summary: Understand how the rhizosphere microbiome in perennial biofuel cropping systems on marginal lands controls plant nitrogen transformations and availability, plant physiology and root allocation, and changes under different cropping systems and environments. Measurements will be taken on 4 perennial cropping systems: switchgrass, Miscanthus, and a 5-species and 18-species assemblage of native prairie plants, with each replicated at 6 sites in Michigan and Wisconsin. Since switchgrass is included in the mixed-species treatments, this project will examine the effect of overall plant diversity on the switchgrass rhizosphere microbiome, crop yields, and soil properties, as well as assess fertilizer applications on nitrogen dynamics. Field and laboratory experiments will be combined, coupling chemical measurements with molecular techniques to examine plant and microbial gene abundance and expression and tracking root exudates to investigate resource exchange between plants and microbes as well as the ultimate fate of nutrients in the plant-microbiome-soil system. This work will address the key question of how perennial crops obtain nitrogen in highly degraded, marginal lands, and examines the entire plant-microbiome-soil system to understand how interactions within this system ultimately influence crop yields and soil fertility.

Project Goal and Summary: Address sustainable switchgrass production by exploring plant systems, the plant microbiome, and ecosystem processes through the integrating lens of multiscale modeling. Analyses will be based on a detailed characterization of common gardens at 14 sites across a continental latitudinal gradient. Plant systems research will use locally adapted plant material to explore plant function, understand the mechanistic basis of environmental interactions, and discover the plant genes important for adaptation and sustainability in the face of climate change. Plant-microbiome research will characterize the microbial communities associated with switchgrass using genomic tools, and link these data with plant trait information to evaluate drivers of plant-microbiome interactions and their impacts on ecosystem processes. Ecosystem processes research will focus on carbon cycle responses at the ecosystem level, coupling plant growth and physiology measurements with carbon pool and flux measurements that integrate carbon dynamics across temporal and spatial scales. Finally, multiscale modeling will define conditions of a sustainable biofuel system and identify key tradeoffs between genetic diversity, productivity, and ecosystem services, filling gaps in current empirical knowledge as well as generating new hypotheses concerning the plant-microbe-soil interface. Ultimately, these studies will identify critical plant-microbe-soil traits that may be manipulated, through breeding or agronomic management, to improve the sustainability of biofuel feedstocks.

Project Goal and Summary: Generate a model linking sorghum physiology and genetics with its epigenetic regulatory machinery, microbial community, and composite genetic pathways involved in drought response. Efforts will focus on the role that epigenetic signals play over time in acclimation to and recovery from drought. Responses to water deprivation of two sorghum cultivars differing in their drought responses will be followed during drought studies in California’s Central Valley, where lack of summer rainfall makes well-controlled, field-based drought studies possible. Phenotypic analyses will be conducted to chart characteristics such as growth, flowering time, and grain and biomass yield. Leaf and root samples also will be taken to track spatiotemporal changes in epigenetic, transcriptomic, metabolomic, and proteomic footprints. Shifts in sorghum-associated microbial community composition and activity throughout the drought period will be studied to determine if changes in membership or functional capacity within the rhizosphere, root endosphere, and phyllosphere correlate with epigenetic, transcriptional, or metabolomic variation in the plant. The ultimate goal is to identify key transcriptional regulators and pathways controlling drought resistance and characterize their mechanisms of action in both the plant and its associated microbial communities. The genetic targets and their regulatory pathways will be utilized in future efforts to improve growth and biomass production of sorghum and other crops in the field and in marginal lands under water-limiting conditions.

Project Goal and Summary: Establish a foundational, systems-level understanding of plant, microbial, and environmental interactions that will lead to strategies for enhancing sorghum growth and sustainability through genetic and microbial adaptations to water- and nitrogen-limited environments. This project will utilize multiple interdisciplinary approaches in varied settings and a range of methods, including classical whole-plant physiology, stable isotope detection, phenomics, transcript profiling, metabolic profiling, 16S amplicon sequencing, metagenomics, microbial genome sequencing, comparative genomics, microbiology, genetics, and computation. Identification of microbial community membership and testing of culturable microbes, as well as genetic dissection of sorghum genotype×microbe interactions, will result in new strategies for the development of microbial solutions to increase abiotic stress tolerance and sustainable sorghum systems. Two major resources will be created: a sorghum microbe collection and a multidimensional relational database to house and access the biological materials and data generated in this project. This research will increase knowledge of the genetic and physiological mechanisms involved in water use efficiency and nutrient use efficiency, which will be used to create sustainable sorghum biofuel feedstock systems on marginal lands.