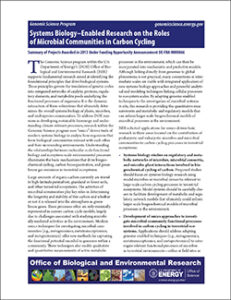 The Genomic Science program within the U.S. Department of Energy’s (DOE) Office of Biological and Environmental Research (BER) supports fundamental research aimed at identifying the foundational principles that drive biological systems. These principles govern the translation of genetic codes into integrated networks of catalytic proteins, regulatory elements, and metabolite pools underlying the functional processes of organisms. It is the dynamic interaction of these subsystems that ultimately determines the overall systems biology of plants, microbes, and multispecies communities. To address DOE missions in developing sustainable bioenergy and understanding climate-relevant processes, research within the Genomic Science program uses “omics”-driven tools of modern systems biology to analyze how organisms that form biological communities interact with each other and their surrounding environments. Understanding the relationships between molecular-scale functional biology and ecosystem-scale environmental processes illuminates the basic mechanisms that drive biogeochemical cycling, carbon biosequestration, and greenhouse gas emissions in terrestrial ecosystems

Large amounts of organic carbon currently are stored in high-latitude permafrost, grassland or forest soils, and other terrestrial ecosystems. The activities of microbial communities play key roles in determining the longevity and stability of this carbon and whether or not it is released into the atmosphere as greenhouse gases. These processes often are only minimally represented in current carbon cycle models, largely due to challenges associated with studying microbially mediated activities in the environment. Modern omics techniques for investigating microbial communities (e.g., metagenomics, metatranscriptomics, and metaproteomics) offer new methods for capturing the functional potential encoded in genomes within a community. These techniques also enable qualitative and quantitative measurements of active metabolic processes in the environment, which can then be incorporated into mechanistic and predictive models. Although linking directly from genomes to global phenomena is not practical, many connections at intermediate scales are viable with integrated application of new systems biology approaches and powerful analytical and modeling techniques linking cellular processes to ecosystem scales. By adapting genome-enabled techniques to the investigation of microbial systems in situ, this research is providing the quantitative measurements and metabolic and regulatory models that can inform larger-scale biogeochemical models of microbial processes in the environment

BER solicited applications for omics-driven basic research in three areas focused on the contribution of prokaryotic and eukaryotic microbes and microbial communities to carbon cycling processes in terrestrial ecosystems:

In addition to addressing these three focus areas, researchers also were encouraged to incorporate project elements aimed at developing data-driven systems biology applications in collaboration with the DOE Systems Biology Knowledgebase. Key points of emphasis in this section of the funding opportunity included building tools for integrating and visualizing omics data at the microbial community scale and developing methods that link dynamic regulatory and metabolic networks to higher-scale biogeochemical process understanding.

Multi-Omic Analyses of the Dynamics, Mechanisms, and Pathways for Carbon Turnover in Grassland Soil Under Two Climate Regimes

The goal of this project is to investigate how altered rainfall impacts carbon stored in grassland soil by characterizing effects on microbially mediated carbon decomposition and nitrogen cycle processes. The project will use genome-targeted metagenomics, stable isotope–resolved metaproteomics, and community metabolomic analyses. The study will leverage a longterm ecological research site in California that features an ongoing experimental manipulation of water inputs to mimic shifting precipitation regimes relevant to climate change scenarios. New data visualization tools will be developed for the DOE Systems Biology Knowledgebase to facilitate integration of the information generated in the study and scaling of data to higher-order process understanding.

The goal of this project is to use a microbial food web mapping approach to track different classes of isotopically labeled carbon compounds into the DNA of active microbial community members in forest, grassland, and agricultural soils. By simultaneously tracking the consumption of labeled substrates into nearly every member of the soil community, the approach will allow dynamic mapping of microbial food webs involved in soil carbon cycling processes. The investigators will characterize the spatial and temporal dynamics of these microorganisms across a series of sites representing a range of soil characteristics, including organic carbon content, pH, and overlying plant communities. This approach permits the development and testing of hypotheses relating carbon assimilation by microbial taxa to their ecological distribution in space and time. Resulting information will inform new understanding of the ecological roles of diverse microorganisms and their roles in the carbon cycle of terrestrial soils underlying agricultural fields, forests, and grasslands.

The goal of this project is to determine how organic carbon decomposition and stabilization processes in soil are impacted by the interactions between plant roots and soil microbial communities. The investigators will attempt to map processes involved in transformation of plant root material to stabilized soil organic carbon by tracking the functional succession of microbial communities during utilization of root exudates and decaying root litter under ambient and elevated CO₂. To identify key metabolic pathways involved in carbon cycling and assess how pathways and process rates change in response to elevated CO₂, the team will use a multi-omics approach (e.g., genomics, proteomics, transcriptomics) coupled to stable isotope–enabled analytical techniques (e.g., nanoscale secondary ion mass spectrometry and scanning transmission X-ray microscopy). These approaches will be applied to environmental samples as well as constructed model rhizosphere systems at various scales of complexity, facilitating experimental manipulation while still allowing interpretation of findings in the context of natural soil systems. The project simultaneously will develop a new data integration pipeline for the DOE Systems Biology Knowledgebase that will provide a highthroughput method for annotating functional genes in metagenomic and metatranscriptomic datasets. Data generated in this study will be used to parameterize a trait-based model of the microbial community functions that govern carbon stabilization and turnover in the soil rhizosphere.

The goal of this project is to develop new approaches to target metabolically active microorganisms and characterize functional processes that drive carbon cycling in soils from bioenergy cropping systems. To examine microbes associated with soil aggregates (i.e., particles of minerals, organic matter, and microbial communities), the investigators will use a combination of omics techniques, substrate and metabolite labeling approaches, and single-cell analytical methods. This approach will allow the identification of key organisms and metabolic pathways driving microbial carbon cycling processes and facilitate the development of an analytical framework to integrate data streams and inform intermediate- and field-scale modeling efforts. The team also will incorporate omics data assembly pipelines and trait-based modeling tools developed for this project into the DOE Systems Biology Knowledgebase. The project will strongly emphasize integrating molecular-scale omics data with ecological measurements to examine carbon cycling at higher scales of resolution, resulting in the development of a trait-based model of carbon decomposition processes.

Multiple-Element Isotope Probes, NanoSIMS, and the Functional Genomics of Microbial Carbon Cycling in Soils in Response to Chronic Climatic Change

The goal of this project is to develop a new omics-driven technical approach that couples multiple-element stable isotope probing with nanoscale secondary ion mass spectrometry (nanoSIMS) and phylogenetic microarrays to investigate microbial community functional processes involved in soil carbon cycling. This technique will be used to identify soil bacteria and fungi involved in organic carbon degradation, examine the impacts of shifting environmental variables on their functional processes, and determine if there is a “phylogentic imprint” on the soil carbon cycle. The capability to quantify in situ microbial growth rates both at the community scale and for specific taxa will be the primary advantage of this new methodology. The project will leverage several long-term field research sites (ponderosa pine and mixed conifer forests) that have been subject to experimental climate change manipulation. The information generated in this work will help to establish whether phylogenetically specific imprints are observed on soil carbon cycling processes and facilitate better incorporation of omics-derived data into process-scale modeling efforts.

The goal of this project is to dissect systems biology properties of methane-consuming bacteria (methanotrophs) and examine the impacts of co-associated microbes on their metabolic potential and contributions to environmental carbon cycle processes. The proposed study builds on recent findings by these investigators indicating that current understanding of methane metabolism by methanotrophs (i.e., direct conversion of methane to CO₂ and biomass by specific groups) is overly simplistic. Instead, this process is likely to involve more complex communities of microbes and differing modes of metabolism that depend on specific environmental conditions experienced by the community as a whole. The researchers will experimentally manipulate methanotrophs and constructed microbial consortia to test new hypotheses on the factors driving community methane cycling. Employing a combination of transcriptomics, metatranscriptomics, metabolomics, and metabolic modeling, the approach will compare gene expression and metabolic activity in individual cultures and synthetic communities under varying incubation conditions and identify major pathways potentially involved in interactions between community members.

The goal of this research is to develop a suite of omicsbased approaches and analytical microscopy techniques to investigate the physiology of anaerobic methaneconsuming archaea and their interactions with associated bacteria that enable this mode of metabolism. These organisms play a major role in the global carbon cycle, but their fundamental systems biology remains poorly understood because of challenges in experimental manipulation. Investigators will use a combination of transcriptomic and proteomic techniques coupled with high-resolution microscopy and stable isotope analyses that span community-level investigations (centimeter scale), to interspecies interactions (μm scale), to individual cells and their components (nanometer scale). This approach will permit scaling of data from the subcellular to community level to gain a systems-level perspective of microbial interactions in methane-fueled ecosystems. In addition to providing new insights into the functional processes of methane-oxidizing archaeal consortia, the methodologies developed will be valuable in ecophysiological studies of diverse microbial community types in a wide range of environments.

Pathways to Liberation: A Systems Approach to Understanding Carbon Transformations and Losses from Thawing Permafrost Regions

The goal of this project is to examine microbial community processes involved in transformation of organic carbon at a permafrost site in Sweden that experiences a natural gradient of climate change variables. This study seeks to determine how microbially mediated carbon cycle processes influence the fraction of carbon released as CO2 or methane (CH4) from thawing permafrost ecosystems. The project will develop a systems-level mapping approach that incorporates the chemical state and age of organic matter, structural and functional characterization of microbial and viral communities, and tracking of CO2 and CH4 emissions over time. The resulting data will be integrated into several complementary modeling approaches, enabling linkages between carbon transformations, microbial community functional processes, and long-term ecosystem-scale biogeochemistry.

The goal of this project is to examine the molecular mechanisms underlying the observation that elevated nitrogen deposition in terrestrial ecosystems results in a net decrease in decomposition rates of complex organic carbon (e.g., lignin and cellulose) by soil microbial communities. Leveraging a Michigan forest ecological research site that has undergone long-term experimental nitrogen manipulation, the researchers will investigate shifts in microbial community structure and functional processes relating to this phenomenon using a combination of omics approaches coupled with enzyme assays, chemical characterization of soil carbon pools, and ecological measurements. Abundance, composition, and gene expression of soil microbial communities will be determined and related to rates of litter decay and storage of carbon as soil organic matter.

The goal of this research is to establish linkages between belowground carbon cycle processes mediated by microbial communities and multiple higher-scale ecosystem processes relevant to climate change. The project will leverage established field research sites representing temperate grasslands and arctic tundra to examine variability between contrasting ecosystems and integrate omics-driven experimental approaches, single-cell analysis, and computational modeling at multiple scales. Tools will be developed for analyzing omics data and networks involved in functional processes and will be incorporated into the DOE Systems Biology Knowledgebase. The project will place particular emphasis on examining the long-term sensitivity of older, more recalcitrant organic carbon pools in soils to microbial decomposition under climate change scenarios. Another focus will be developing new tools to link molecular-level mechanistic understanding of microbial community structure and function to predictive models of ecological responses of terrestrial ecosystems.